The Dark Gate of Trashburgh 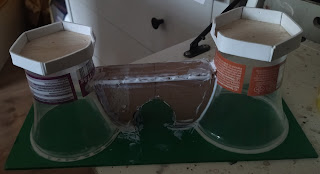 We enjoyed a meal of Aldi puddings and I really liked the shape of their packaging. Thought followed thought, and, since I had not done anything major terrain-wise since our move to the new place, I scavenged around and came up with the idea of making a small gate for the adequately named city of Trashburgh. On the image above, you can see the beginning stages of the build. His Grace the Duke of Rotstein decides the build is proceeding well enough for a personal inspection. The gates will mostly be used for him and his pals to run around in an urban environment, sticking rapiers into each other.

As humidity builds up inside when PVA and the secret ingredient cures on the sides of the things, I had to drill them through at a few points, but this shall not detract from the overall effect.

The base is a piece of foamcore from the stock Dad used to renovate their bathroom. You know where the pudding jugs are from; the tower tops are 2mm balsa, around which I glued some EVA foam and decorated it with 1mm balsa strips. The bulwark is made from the same type of foam, and the gate and main wall piece are corrugated cardboard. And, of course, we must not forget about the secret ingredient. 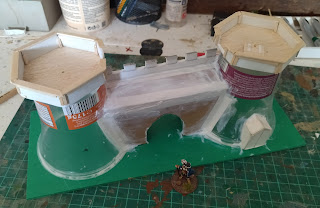 Why yes, the secret ingredient! It's an artist's acrylic medium called "heavy body gel". It can be used to fill in large gaps and dries to a hard finish. It's great for texturing as well. It can be shaped with a spatula or fingertip for the less sophisticated like myself.

Once I added a few more bits and pieces, I'll cover the walls in a stone effect plaster and paint the thing to an eggshell colour, or some similar shade.