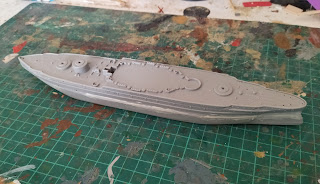 I might have mentioned previously that I'm on the lookout for the Takom 1/700 scale Derfflinger kit. Well it was made available in local model stores recently, so, to clear the queue and do some practice, I started working on the 1/700 scale Hobby Boss USS Arizona.
The kit is the 1941 version, but with some minor tweaks like removing the AA platform from the main mast and the gun shields from the deck, she can be moved a little bit back in time, to the second half of the '30s, when the catapults, torpedo bulges and the rest were already installed. The interwar period is very interesting when it comes to naval development, and I'd like to represent the ship in happier times, if such can be said.
The procedure to make this a better model commenced with ordering some aftermarket parts. The first to arrive were the Trumpeter set of SOC-3 Seagull floatplanes. Judging from period photos, these were the spotters used by the Arizona in the target period. Next, I ordered the Tom's Modelworks PE upgrade set, then started sweating uncontrollably when it arrived and I had seen how fickle the parts are. And finally, I ordered some primary and secondary metal barrels made by Aber. Until they arrive, I can work on the rest.
Now on to the model. After reading back on the list above, it looks a lot like attempting to cover up a large piece of stinking turd with layers of golden foil, because, honestly, the quality of the kit is atrocious. But hey, it's my garbage, please don't shame it.

For example, the upper hull was so warped that when I glued it to the bottom, the two parts split after about ten minutes of being clamped together. So I had to add more glue. When they stuck, the seams were still looking really bad. 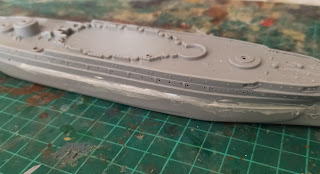 As the old saying goes, first you have to burn something down to the ground before you can start actually building back up. Now, after adding a ton of filler, I will start sanding the sides and the bow so she might actually look like a proper battleship.
Ah, also, I drilled a hundred or so holes where those protruding things meant to be cabin windows were. And, with a larger diameter drill, countersunk those that I could reach. Not being meticulous and all. 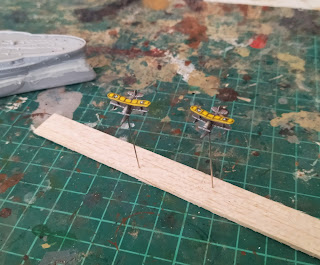 To tell happier tales, here's the two Seagulls I'm going to put on the catapults. I had to hand paint the markings because the ones that came with the kit were way too large. All they need now is some varnishing.
Written by: Andrew McCory Time: 2:17 PM