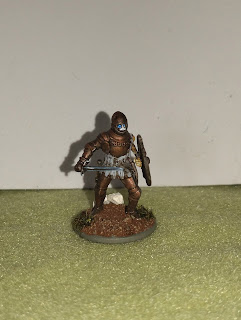 This is a fantasy-ish Perry conversion. I took a foot knight of their English(?) HYW set, and modified it a little. I drilled out the eyeholes and made a dent on the helmet. I took a skeleton arm from a spare skeleton, he's not gonna miss it, and added a GB plastic round shield, making it look a bit battered by, again, carving and drilling through it. The upper part of the surcoat was modelled with green stuff, and the same was done to the joint of the left arm and the body. I also scraped the bottom of the surcoat with a scalpel to make it look torn. 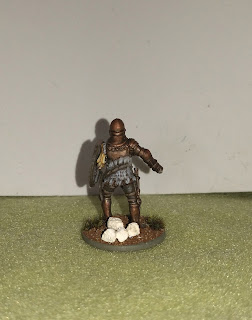 The rusted armor was done by bringing it up to a high metallic silver polish, then gradually making it more brown and red. Finally, a reddish metallic drybrush was added. The blade has the original sheen, as I imagine it has magical qualities and is perhaps responsible for keeping its wielder in the state of undeath. On other pieces of clothing and equipment, I deliberatly used muted and grayish-looking tones. I imagine the knight as more recently deceased as say, a full-on skeleton, but organic material decays faster than metal. 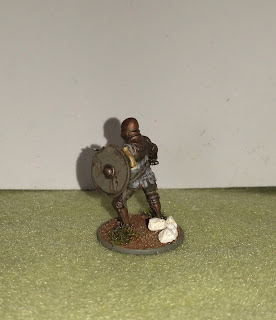 I've been thinking about playing Frostgrave a lot recently, and this model is sort of inspired by that thought. Most of the Perry figures I still have on sprues could suit the game very well.
Written by: Andrew McCory Time: 6:47 PM