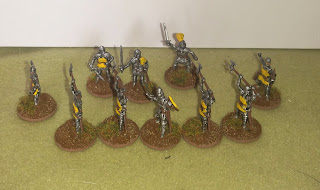 I am a member of the 'Super Cheap Wargaming' Facebook group. Sometimes it even proves itself useful: for example, a member there directed my attention to the fact that the black hole that is The Eye of Terror AliExpress carries a pack of 1/72 soldiers, no less than two hundred pieces, for the price of about a single box of figures (for the sake of comparison, 30-50 figures) from a retailer, p&p included. This was something I could not miss.
When it arrived (suprisingly fast, about two weeks, no customs charges either) and I could closely examine the contents, it turned out that the figures are carbon copies of multiple Caesar Miniatures sets. (What do you call a Chinaman that copies another Chinaman? Rhetoric question.) The plastic is the flimsy kind one could find toy tanks in army men sets built out of. There is lots of flash, gaps and mould marks. Still worth the price in my eyes, as there is just as much, or even more, work to do on other commercial figure sets.
As the figures are from a variety of periods spanning the Middle Ages, I intend to use them for not-so-serious medieval fantasy games (dinosaurs may be included!). This ten are the Knight of Holstyn from the Kingdom of Lathugan, his two squires and a band of mercenary pollaxe-men and archers hired by them. 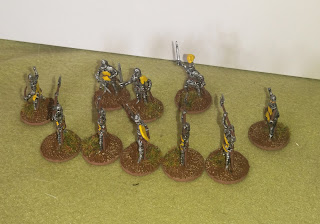 After removing all the casting errors I could, I went with a simple colour scheme of silver metal on the plate and mail, yellow on the hauberks and plumes, and flat brown on the weapon shafts, arrow pouches and belts. I have long since been thinking about creating armies around beer brands, so I guess more is to follow.
Written by: Andrew McCory Time: 5:19 PM