Meeple Warfare! - Ambush near the Sanctuary

I've written a set of rules adequately named 'One Page Meeple Warfare'. It's bloody. It's short. All in all, a modern classic. You can reach it from the Rules page of this blog.
In this scenario, the Green Kingdom's warriors, six in number, are escorting a holy man and his two servants to a remote sanctuary. Looking for a chance to provoke an all-out war, the Red Barbarians launch a raiding party to capture or slay them.
OOB:
Green Kingdom: 2x Battle infantry, 2x Archers, 2x Light infantry, 2x Peasant/Rabble, 1x Healer
Red Barbarians: 3x Cavalry, 4x Archers, 4x Light infantry 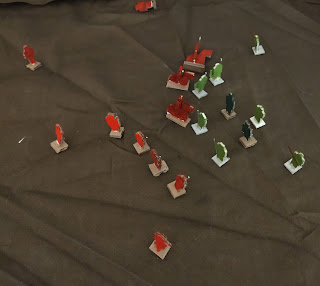 Turn 1, the Red Barbarians gain initiative and strike immediately. The Greens send the two heavy infantry to stop the cavalry charge, and the unarmed servants rush to aid the light infantry in holding back the enemy. A Red horsemen and archer are wounded.

Turn 2, the Red cavalry rallies and charges again, killing a Green infantryman and an archer. However, another horseman falls. The two light infantry groups make short work of each other. The holy man heals a Green archer. 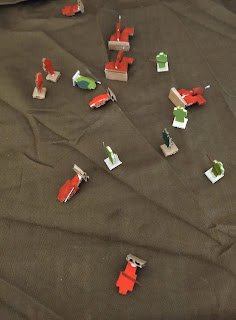 Turn 3, the last Red horseman charges the cleric, but before he could land a strike, an arrow lands in the middle of his back. The remaining Green light infantryman charges the Red one and slays him, while the Green archer strikes down his counterpart. The last Green heavy infantryman is wounded by a Red archer. However, the raiding party, already taking many losses, fails, and the remaining two barbarians leg it for the border.
Assuming that the priest can heal the last wounded man, the tally is the following: the Reds lost 2 dead and 7 wounded, most likely dispatched by the victors after the skirmish, and the Greens lost 3 dead. Plenty of reason to start a war, if you ask me.
The rules are crude but seem to be working, just like the balsa and cardboard figures I made for the game.
Written by: Andrew McCory Time: 12:43 PM