Research on the MNF Bretagne that might be useful for somebody

Some of my readers might have followed the adventures with the 1/1000 scale waterline model of the Bretagne during Spring 2020 on this blog. That model was broken and thrown out to the trash, but the interest remained. The Bretagne-class, just like most dreadnoughts designed before or during WW1 and continuing to serve in WW2, are an interesting topic, and they are probably one of my favourite ships despite their obvious flaws.

So just recently I got back to scale modeling warships, and I'm well on my way of completing the Hasegawa 1/700 waterline Kongo kit. I also purchased the Minihobby/HobbyBoss 1/700 Arizona along with some photoetch details to exercise on, before moving on some major project. I'll build the Arizona in her 1931 bright grey livery. The major project then should either be the full hull 1/700 Takom Derfflinger, or an 1/700 scale full hull scratchbuild of the Bretagne. For this, well detailed and high resolution building plans in .tiff format are available on the internet, if anybody is interested.

I have collected a number of period photos, and also photos of models and other reference material, to complete this build, and I would like to share some of my findings, mostly for myself to keep them in a single place, but also for sharing the knowledge.

This might help IDing photographs of the ship. Source on this information is a booklet published by the Marine Nationale that I dug out from somewhere. It is also useful information when trying to discern which of the sister ships is on the photo, especially knowing that Lorraine was the only one that had the No. 3 turret removed (subsequently, Lorraine is the only one that has her mainmast yards raked).

1916-1921: hull, upper works and stacks grey, no identifications strips, turrets coated with oil (it looks like the colour of tar on B&W photos, but it should sort of be a very dark bronze colour, the results you would get when leaving a piece of carbon steel in used vegetable oil for a while). 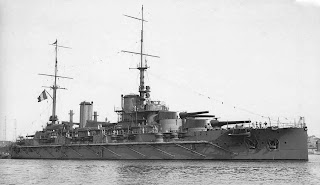 Bretagne prior to her first major upgrade, you can sort of make out the darker shade on the turrets.

1921-26: hull and turret colours remain the same. The superstructure receives a major refit, the two pairs of foremost and rearmost 140mm L/55 secondary guns are removed. The main tripod is coloured black up to the level of the spotting top, this is painted white, the same as the shorter rear mast. A single white identification strip on the rear stack (?).

This is the closest image I could find, with no visible identification marks on the funnel, and the spotting top looking white-ish. The same arrangement is IDd multiple times as the Bretagne, so it must be it.

1926-29: The rear mast is lengthened, in a black colour and the main gun director installed on the tripod is painted black. No ID strip. 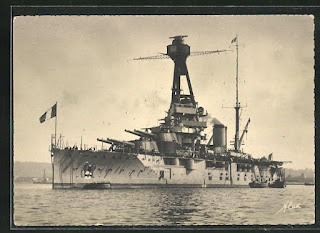 1929-39: Same as above except the gun director is painted white again, no ID strip on the stacks. 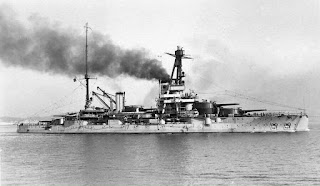 1939-40: the entire hull, along with the turrets, is repainted a brighter grey, the main tripod stays black up until the gun director platform. Two black bands on the rear funnel (Lorraine received a single black band and Provence had none). There is evidence that just before her sinking, the funnel bands were painted over. 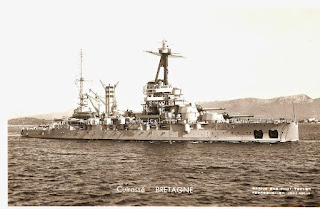 No wooden deck on the ship

All three members of the class were completed with linoleum decking all along, and this did not change during their service time. This is evidenced by the model of the Provence, as built, in the Toulon museum, and also period photographs. 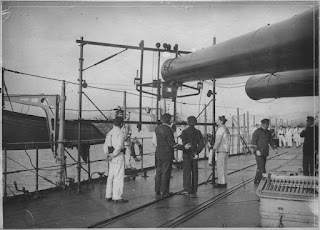 This is the main deck of the Provence, and you can see that the indents on the deck are too far apart to be made out of strips of wood.

Another image showing the aft part, looking forward, of the third sister, the Lorraine, dated 1916, showing the linoleum deck. It should be a medium reddish brown colour, a bit more faded than the dark brick red of WW1 German warships. 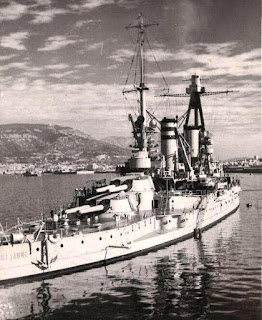 An image of Bretagne with the name plate visible, in her post-1939 livery, and some of the deck panels can sort of be made out.
Anti-fouling paint
The same Marine Nationale booklet quotes a survivor of the attack on Mers-el-Kébir, mentioning that when Bretagne foundered, the red colour of the bottom of the hull could be seen. The model of the Provence, as built, in the Toulon museum shows a green bottom for that particular ship, but I'll stick with the red. 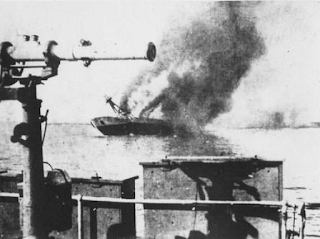 Conversely, there are a few images that falsely ID the Provence, sitting low in the water after being scuttled in Toulon harbor in 1942, as the Bretagne. Other photos, showing the Bretagne with guns trained on something and fire venting out from the rear funnel, do not present her black funnel bands (a last minute repaint, or contemporary censoring of the images might be the case). However, a Dunkerque-class ship is in the background of these photos, and those were present at Mers-el-Kébir and not at Toulon. All in all, a little bit confusing.
If anything else of interest turns up, I shall update this post here.