Since the last post way back when, I've completed some improvements over this build.
The main hull has been sealed by adding the 2mm deck, and the next tier for the secondary battery was built over it. This part is also hollow with internal strengthening cross-pieces, and as the sides were already 5mm tall, I did actually inlay the deck. This caused some fit issues, solved by lots of wood filler and sanding. It looks OK now, but far from done.
The uppermost tier at the bow has also been cut to shape and a piece of deck was glued on top. I had to add some extra pieces at the sides below it, in order to properly shape the concave curve of the bow. I hacked away the bottom at the bow for the torpedo tube protrusion, but had not sanded it yet, as it's a very delicate part and more shaping around it is required.
Next comes a bit more rough sanding before the fine-tuning may commence. There is still a lot of work to be done below the waterline, especially aft where the keel, two-tiered rudder and four screws must be placed. I'm taking it in slow steps. A pair of reference pictures so you may see what I'm talking about: 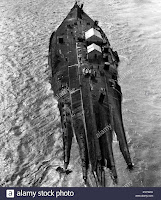 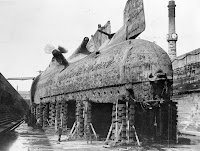 Fun things to do with wood. I'm trying not to over-stress myself with this project, doing it when I feel comfortable. The good thing is that if I'm making an error, just a bit more wood has to be added and the thing done again.
When most of the main hull is ready, I'm going to add the armored belt line by gluing a piece of 1mm balsa over the sides and then sanding it to shape. I'll do the same with the upper edges of the deck, to ease painting. I was thinking about starting some work on the superstructure sub-assemblies, but I don't really want to rush things.
While collecting more reference material, I've settled with the darker grey hull and brighter grey superstructure scheme, traces of which may be seen on period photos. Black and white photography is tricky in this regard, as the darker shade might just be caused by the light settings, the same way the scrubbed matte teak deck looks very dark besides the grey steel that reflects the light better. Overall, a bit more important issue in 1/500 than 1/2000.
A question also arose about the fitting of the secondary battery. Most period photos before and after the anti-torpedo nets were removed (and I don't want to do those) show the edges of the upper deck a continuous line above the casemates, but some models and period photos show it staggered like the Derfflingers. This might have something to do with the 1916 refit of the ship, but I have to dig deeper.
Written by: Andrew McCory Time: 11:29 AM