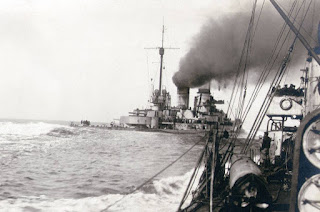 Swimming, and not sinking. Seydlitz was actually one of the best ships when it came to not sinking, which I intend to simulate.
Here's my next project once I'm done with the finals: an 1/500 scale full hull model of the good old SMS Seydlitz. The ship should be about 40cm long when completed. As I learned a lot about stability and waterproofing when creating the Derfflinger mock-up, I thought I could make this one able to swim as well.
A search on the various forums turned up a bunch of quality reference photos, and also a few detailed blueprints, including cross-sections, I could use. Those are already printed to scale in multiple copies (so I could use them as cut-out templates), and my younger brother started 3D printing a few items, namely coaling hatches and turret rings, to support my build. 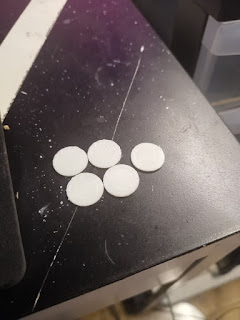 The hull is going to be shaped out of balsa layers. The bilge keels and rudders will most likely be made out of some denser wood. The core of the hull is going be hollow, with strengthening bulkheads to hold the deck. The fore and aft parts where the hull narrows down must be made solid, and there should be some joinery done for a more seamless transition between the sides and the solid pieces. I'm thinking about keeping the deck in a natural wooden color, and only polishing and varnishing it.
The bottom of the hull is going to be weighed down with some slabs of steel I collected from my workplace, and to prevent any chance of internal humidity attacking them, they are going to be covered in a mix of sawdust and PVA, also known as the modeler's classic wood filler. I'll try to make the core of the upper works hollow as well. For the turret rings, I would have run with the more usual 17mm diameter steel washers, but that would overweigh the upper side of things, so these lighter, 3D printed variants come handy.
I'm going to display Seydlitz at a state of battle readiness, which means that the pair of large cranes would be disassembled and placed on deck, and all clutter, including boats, removed. Once complete, I'll finish the hull with a synthetic matt varnish. 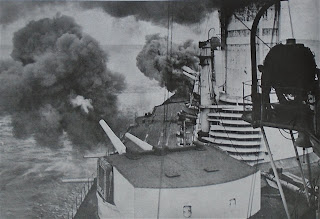 Seydlitz in action - note that the socket for the crane next to the stack is empty, and a cable runs towards the deck where the crane itself is stored.
I have most of the materials to build the ship assembled. I won't wait until everything is complete, so I'll purchase the turned brass gun barrels at a later point. Unorthodoxically, I'm going to use the set for the KGV class battleships, because those are made in 1/400, closer in scale than the traditional 1/350 parts, and include ten barrels instead of the more common eight.
Written by: Andrew McCory Time: 7:55 PM