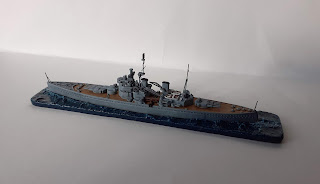 What a surprise, another naval-related post, this time a 1/1200 scale Revell kit.

Not many good things to say about it, on the box it says it was re-tooled, but some parts don't fit very well, and there is a lot of filing and scraping involved. The friction fit on the turrets is especially bad, it doesn't take into account any layers of paint that might get in there. 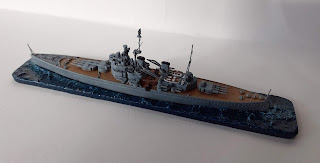 I painted the turrets, AA mounts, the seaplane and boats separately, then assembled the whole thing. Some kitbashing was required: the plastic masts were replaced with 0.5mm steel wire, and I made them into tripods, the way God intended all masts to be (the box art and painting manual contains the tripods but the kit actually does not).

The base is a piece of 3mm balsa wood, the water effects are made with the PVA+toilet paper method, something I stole learned from railroad modelling youtube videos.

I have a Revell Bismarck, Missouri and Enterprise kit waiting to be refurbished and based. This includes updating the masts, secondary gun barrels etc. to steel wire and some other minor changes that make them look better than straight out of the box.

PSA: We are in the middle of moving, so in order to get rid of things rarely or never used, I would like to bring to your attention the stuff I put up for sale some weeks ago, most of it is still waiting for a new home.
Written by: András Szilvásy Time: 1:03 PM