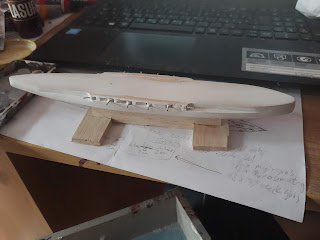 After the wood filler is completely dry, comes another session of sanding everything. The thin parts of the deck over the casemate have expanded a little, but I don't think it will be visible after everything is complete. 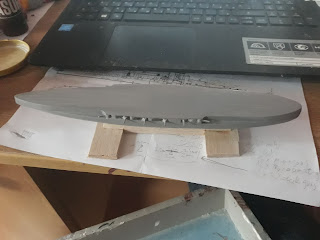 I apply a coat of PVA mixed with grey paint in order to further smooth out the surface. I'm doing more sanding after this.

This is far from the first layer of real primer, which will be white to bring out the colors a little bit more - Austro-Hungarian dreadnoughts had a bright blue grey finish according to many images. 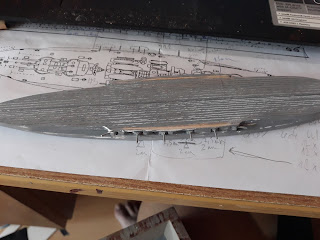 I mark the deck with the back of my scalpel tool to represent the wood. It's always better to use a softer or duller tool for such things. 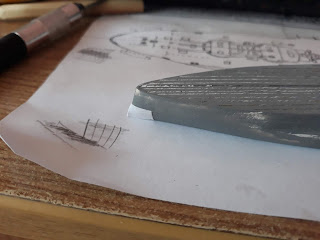 The prow should be more pronounced at the waterline than it currently is, so I'm adding a small piece of paper. If you're doing this, cut out a V-shape, don't do it with a flat strip. 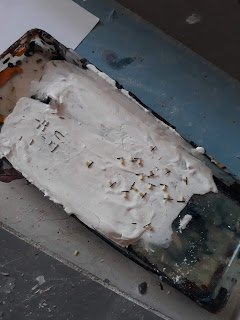 While the paint dried, I have assembled all 18 3" deck guns and started painting them with a bright grey primer, dark grey wash and bright grey highlight. 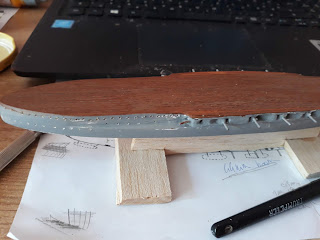 Drilling holes for all the windows and adding a layer of chestnut brown over the deck to get in the creases so no bare wood would show. 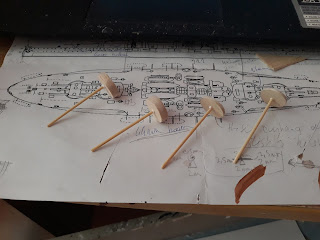 Here are the turret rings, roughly 16mm diameter. My template was a 15mm washer, otherwise they are hand shaped and sanded. I follow the same method with them, sanding up to 1000 grit, wood filler, sanding again, paint and PVA mix. The toothpicks are glued to a drilled hole with a dot of PVA, this helps handling the things while painting. I'll shape and prime the turrets separately.

I've done another layer of paint and PVA on the hull to hide the wood filler and the black paint I've inked the windows with. It is starting to look like a real ship.


I'm going to sand the hull once more, then probably apply a thin coat of PVA over the sides for that extra smoothness. I'll paint the turrets separately, but the rest of the superstructure will be added and then the whole thing will be painted.
The 3" guns were painted separately because they are really small, and I would just splash the deck while painting them after they're fixed in their position. I think I'll do the same with the masts, but the unarmored bridge section is directly connected to the forward mast, so I might change my mind, or paint the masts in two separate pieces, one of which would be glued to place.

I'm also thinking about adding some crew to the bridge and the deck, because it always bothers me in simulators when ships look like automatons - something that wouldn't bother anyone in say, 1/1000 scale and above
Written by: András Szilvásy Time: 1:32 PM