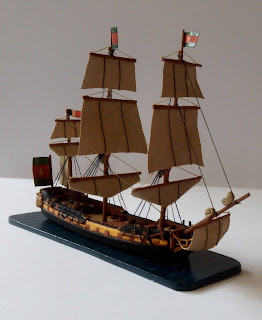 After a failed attempt, I managed to produce the first of the small scale Schultze-Böhnstadt Navy frigates, the famed Dachshund. There is no fixed scale, I just made her to a slightly smaller size than comparable 1/450 and 1/600 scale models like the Heller Le Superbe, La Couronne, and the Revell Spanish Galeon, all of which I'm using as contemporary warships.

The Dachshund was completed to protect Schultze-Böhnstadt overseas interest, guard trading routes and present the flag around the globe. There are whispers that an Albionic-led anti-piracy squadron is due to assemble at the northern Barfrican coast, near the famed Pirate Bay, and she might be needed there.

The hull is built out of 4mm balsa wood sanded to shape. The masts are toothpicks, the sails and flags are from an old piece of cloth. The rest is made from balsa strips, and the gun barrels are stretched plastic sprue. 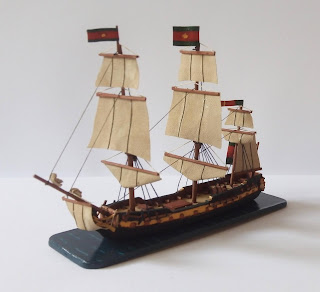 There is little fancy golden detail on the hull, German minimalism style. The prow is made from stretched sprue as well. The base is a piece of 3mm MDF board sanded multiple times between layers, and sealed with a solvent-based gloss varnish. 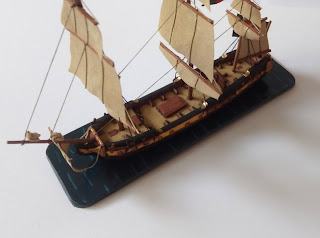 There's exactly 24 guns visible on the upper decks, which were a pain to assemble and place, but the final effect pays for it. Of course the sidewalls should be a lot thinner, but this is what I could safely achieve - due to the sails breaking up the silhouette, it does not look off when placed next to plastic ships. I've also made a small wheel and added photoetched gratings from the PE set I acquired for the Derfflinger.

You might argue that she is actually a corvette/sloop, having a not completely covered gundeck, but blame it on the inexperience of the Schultze-Böhnstadt shipwrights, and perhaps their diplomatic service, trying to present the ship larger than she actually is. Well, she carries 38 guns plus two bow chasers, so quite a formidable vessel for the 18th century seas. 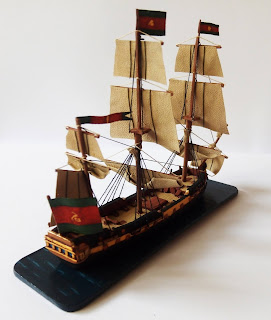 While becoming more practiced in rigging small ships like this, I did not wish to overcomplicate it - as a wargaming model, the chance of damage done to the rigging is very real, and the more complicated it is, the harder it is to repair later.

I've also got a used Revell 1/450 Victory for a bargain price. This one is a lot bigger than all other ships, so I'm going to be using her as the Dual Kingdom of Insolencia's over-sized flagship, the Nuestra Senora Santa Maria de Concepcion Immaculata e Bendecida por San Felipe e San Antonio de Habana (the trick being she has ample time to close the range while the enemy says the name). This one's already assembled and primed, but I think I'll do a pair of galleys first, simply because I'm kind of tired doing classic European ships and I learned a lot about scratchbuilding with the Dachshund.